Reading progress update: I've read 24%. - this is so fresh 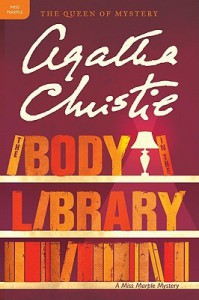 Until I read 'The Murder At The Vicarage' last September, my impressions of Miss Marple came entirely from adaptations of the novels for television. Now that I'm encountering the original text, I wonder how the TV people came to have left out most of the humour. They seem to have paid more attention to the period clothes and cars than to the tone of the novel.

So far, 'The Body In The Library' reads like a rather drole assault on the more ridiculous elements of detective fiction combined with wickedly accurate evocations of what she calls 'the ruling class of censorious spinsters'.

The whole set up of the book, the finding of the body of an unknown young woman in the library of a respectable Colonel, is positioned as so unlikely (except in detective books) that it is hard for the Colonel and his wife to accept the possiblity of it being real. This takes a swipe at detective fiction (where such discoveries go unremarked) and makes the discovery a source of humour rather than horror, that sets the tone for the novel.

Christie double-down on this by having the Colonel's wife, Dolly, call Jane Marple (even though it is not yet eight o'clock in the morning) and invite her to come to the house. Dolly explains that she wants Jane to come because she knows about murders and:

'What I feel is that if one has got to have a murder actually happening in one’s house, one might as well enjoy it, if you know what I mean. That’s why I want you to come and help me find out who did it and unravel the mystery and all that. It really is rather thrilling, isn’t it?’

I thought this was fun but also a reality check we readers of mysteries who emphasise the puzzle of finding the murderer over the brutal death of the person murdered.

When Christie moves on to show how the village gossip network functions, she doesn't miss an opportunity to deride the unconscious entitéement of the gossipers. I particularly liked this description:

‘What news?’ demanded Miss Hartnell. She had a deep bass voice and visited the poor indefatigably, however hard they tried to avoid her ministrations.

I'm delighted by how fresh the humour in this book is. It's just what I need at the moment.