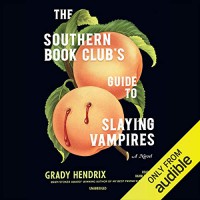 From the title, I assumed 'The Southern Book Club's Guide To Slaying Vampires' would be a soft, fluffy story. Boy was I wrong about that.

To be fair to myself, while my reading before Grady Hendrix had told me that vampires, (except for the sparkly vegetarian ones) were scary predators, it had also told me that they'd be kept in check by:

So I tended not to worry about them too much.

Grady Hendrix rejects all of that, His vampire is a lone, ungoverned, insatiable predator who won't be stopped except by desperate, ordinary people who have nothing to lose and it won't be easy.

One of the things that will make it difficult is that ordinary people like you and me, we don't really believe in vampires any more than we believe in Tinkerbell.

Hendrix poses the question, 'How do you fight what you believe isn't real?'

Part of the answer to that question is likely to be 'Alone', because who's going to believe you?

Except maybe the women you meet every week at a book club devoted to discussing serial killers?

This way of looking at vampires makes them a lot more threatening.

At the start of the book, I assumed, wrongly, that all that was needed was for the women to form their own Scooby-gang and the vampire would be done for. At that point, the vampire seemed menacing but no more than that. Once he was unmasked, what harm could he do?

I raised my threat assessment level when the vampire sent killer rats to swarm helpless women in their own homes but I didn't really understand what I was dealing with until two of the middle-class white women from the book club went to visit the home of the black nurse who was hurt in that attack. While they were waiting to be let in they heard little girls singing a skipping song about the Boo Daddy who is coming at night to steal children. The matter-of-fact tone of that song and the internalised fear it represented was more chilling than the rats.

I knew then that Hendrix wasn't just talking about vampires here, or perhaps it's more accurate to say that the vampire isn't just a vampire. The vampire is an evil that lurks beneath the surface of our society but that we don't talk about.

I think the Boo Daddy that the children sing about and that the adults put effort into not seeing, represents the white male predators who move unpunished through our world because we don't believe that racial hatred, misogyny, and twisted lust will really rip away the lives and happiness of the people we love. We tell ourselves that ours is not a culture that condones rape and abuse and killing, even though all the numbers tell us a different story.

Hendrix's vampire is an embodiment of insatiable male greed. He's charming and charismatic, has the knack of making the men around him want to follow him and feel better about themselves for doing so, even as he takes every opportunity, politely and with a smile, to undermine, demean, mock and threaten their wives. He is a corrupter, a sower of discord, a parasite.

Hendrix's vampire isn't some stuffy Transilvanian Count pining for his glory days, he is 100% Pure American Prime Raggedy Man. He's the hustle that has always sold the American dream without ever delivering it.

Men don't come out of this story well. For me, one of the most disturbing scenes in the book was where the husbands of the women in the book club behave (entirely believably, I'm afraid) like a group of pompous, patronising, patriarchal pricks, treating their assembled wives like children needing correction from wiser heads. This scene made me think that the women should make the suspected vampire a second priority and come together to devise a way of teaching their husbands the need to respect the women they're married to. Except, most of the ways I could immediately think of to do that would have turned the women into widows.

It's that mix of fury and impotence that sets the tone of this story.

What I liked most about the story was its message that knowing the vampire is there, knowing who he is and what he does, isn't enough to defeat him or even to convince the people who love you to help you because this vampire has seduced not the women but the men. He's turned them into the worst version of themselves and used them as a rod to impose his authority. Any woman who stands against him risks losing everything and with no guarantee of success.

Look around the world today. The vampires are there in plain sight shielded by men who admire them and who are willing to look the other way while they prey on the weak.

I think Hendrix is telling us that the only way to stop these predatory white men is for ordinary women, the mothers who protect all of us, to acknowledge the existence of the Boo Daddy and work together to rip out its heart. He's also telling us that that kind of thing has a price that has to be paid for in blood, lots of blood, some of it your own.

I recommend the audiobook version which is perfectly delivered by  Bahni Turpin. Click on the SoundCloud link below to hear a sample.