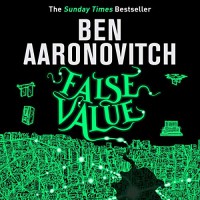 I had fun with this. I'm glad I read it. I hope the next one is better.

I always enjoy "Rivers Of London" books. I love Ben Aaronovitch's imagination and Kobna Holdbrook-Smiths skilled narration, so I was pre-disposed to like this one.

It didn't disappoint. Not really. But it didn't excite me either.

I felt Ben Aaronovitch leant too heavily on "The Hitchhiker's Guide To The Galaxy", (which you wouldn't find on a Silicon Valley Geek Must Read list because it was sooooo long ago) to characterise the this-is-definitely-not-Facebook/Google-honest company that our unscrupulous billionaire runs.

True, the tech company was on the Silicon Roundabout in Old Street, London and the billionaire is Australian rather than American, but still, as someone who has worked with tech start-ups in the US and Europe, the tech industry culture parts of this felt a little old-fashioned to me.

The plot plodded a little. Attempts to rescue this by moving backwards and forwards along the timeline like an early-Millenium thriller tended to disrupt my enjoyment without adding any tension.

Kobna Holbrook-Smith did a good job but it sounded like he was having some problems with his voice, recovering from a cold perhaps, so he didn't have his normal high impact.

Still, "False Value" was a fun read. I liked all the stuff about Ada Lovelace and Charles Babbage getting mixed up with Rose Jars and other hoodoo. I thought the AI testing part was fun and the security arrangements in the company worked.

It was also good to see Peter approaching his imminent fatherhood without panic. I thought the discussion between Peter and Beverley about the ethics of being worshipped and what it does to the worshippers was classic "Rivers Of London" thinking.

I also enjoyed having American freelance wizards in the mix. It was new and it finally gave Nightingale something fun to do.

So, I had fun with this. I'm glad I read it. I hope the next one is better.