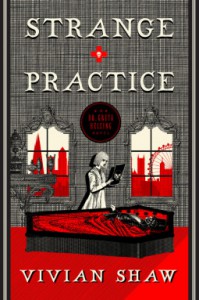 Set in contemporary London, "Strange Practice" is the first book in a series about Dr Greta Helsing who, having recently inherited her father's long-established Harley Street practice is one of only two medical practitioners in London offering specialist medical services to the "differently alive". Her patients include demons, ghouls, mummies, vampires and vampyres (yes, there's a difference - at least medically).

Greta is a very centred, very dedicated medical professional who has grown up the company of her father's non or no-longer human patients. She has no superpowers and no urge to join the ranks of the undead. She just wants to keep all the Differently Alive as well as possible.

Her job is made harder and ultimately her life is threatened by a strange sect of monks who are attacking and killing London's other than human population.

To survive, Greta has to work with London's most senior vampire and an unlikely team of non-human and human allies.

I took a while to acclimate to "Strange Practice". Vivian Shaw writes in a calm, gentle, very normal way that's completely at odds with the weird things going on. At first, this created some distracting dissonance but, once I settled in to it, I decided I liked it. It was comfortingly English, in a stiff-upper-lip kind of way.

The vampires (and vampyres) in this book are unlike any I've encountered before. They aren't vegan and they don't sparkle in the sunlight but they are exceptionally polite and are happy to accept the burden of Noblesse Oblige when looking after other members on the non-human community. This took a lot of getting used to. I found myself rooting for a sort of "League Of Undead Gentlemen".

"Strange Practice" was a fun, with an interesting plot and a gentle tone.

I started "Strange Practice" as an audiobook but ended up sending it back to Audible. The narrator sounded like she was doing a slightly below average sight-reading rather than a well-prepared narration. Her inappropriate stresses and mechanical mangling of phrases distracted me. Once I was left alone with the text, the voice in my head made a much better job of the reading thing.