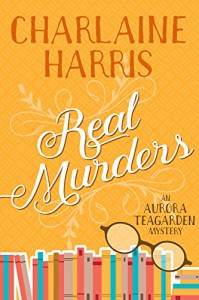 "Real Murders" is a not so Cosy Mystery that is mildly subversive and moderately entertaining.

"Real Murders" was an odd book. It's a Cosy Mystery that makes you think about just how cosy any murder mystery can be.

It's about the murder of a member of the Real Murder Club, who meet once a month to talk about true crimes. It starts with what seems to be a copycat murder of one of the group and escalates from there.

Like other cosy mysteries, "Real Murders" focuses on a small group of people in an intimate, small-town setting, it has most of the violence occurs out of sight of the reader, it's coy about sex, it defaults to a humour rather than aggression when dealing with stress and the main character, who glories in the name Aurora Teagarden, is a small-town-librarian who is almost too innocent to have made it to twenty-seven.

Yet the murders in this book, and there are lots of them, are gruesome, cruel and driven by the sort of hard-boiled sociopathic narcissism that reminded me of Hitchock's adaptation of Patrick Hamilton's "Rope". The murders also revisit actual murders, using them as game fodder, with little or no empathy for the real people involved.

The Real Murder Club the suspects and murder victims are all members of is a ghoulish, voyeuristic thing, yet it's members, including the unfailingly nice Aurora Teagarden, seem unaware of this until the killing starts and the group's existence comes under public scrutiny.

Having read "A Secret Rage" her unflinching book about rape and the equally hard-hitting Lily Bard series, starting with "Shakespeare's Landlord", I know that Charlain Harris can be quite a serious writer when she chooses to be, so I wondered how subversive she intended to be in "Real Murders".

I never read true crime. I understand why people do but I can never rid myself of a sense of voyeurism. The one exception might be "The Five: The Untold Lives of the Women Killed by Jack the Ripper" because of its focus on the lives of the women Jack The Ripper killed but even then, I dislike the continued fame of the Ripper. I was pleased to see that, in the early chapters of the book, Harris seemed to be challenging the ethics of True Crime buffs and perhaps the idea of "Cosy" mystery, even while writing one. She's suggesting that the process of treating killing someone as the starting point for a puzzle serves to desensitise us to the reality of murder.

Here's what's going through the mind of Aurora Teagarden who has discovered the body and called the police.

I knew he was about to tell Gerald that his wife was dead, and I found myself wondering how Gerald would take it. Then I was ashamed. At moments I understood in decent human terms what had happened to a woman I knew, and at moments I seemed to be thinking of Mamie’s death as one of our club’s study cases.

This is followed by a police interview where the detective's disgust at the idea of a Real Murder Club is very clear.

Sadly, that was pretty much the end of any visible subversion. After that, it devolved into a game of pin-the-blame-on-the-suspect in the traditional way. The plot was clever. I didn't guess who was doing the killing and the denouement was skillfully managed.

I was entertained although mostly because the Texan small-town life being described is so far from my experience. Harris' writing is smooth and efficient and Aurora Teagarden is likeable if a little relentlessly, self-deprecatingly ordinary. There wasn't enough there to make me want to read the rest of the series.