"Out Of The Deep I Cry - The Rev. Clare Fergusson & Russ Van Alstyne Mysteries #3" by Julia Spencer-Fleming 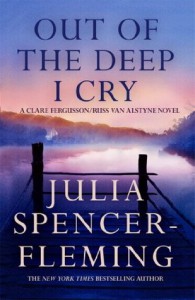 "Out Of The Deep I Cry" links Clare, our modern-day ex-army helicopter pilot turned Episcopalian Priest and Russ our local boy returned to be sheriff after a little too long in the army, more closely to the past of the small town of Miller's Kill, New York.

As with the previous books, "Out Of The Deep I Cry" manages to link the investigation of a crime to a topical issue, in this case, the inoculation of children. It then goes a step further and links the fates of the current Miller's Kill generation with the trials faced by their grandparents, when diphtheria was killing children, when inoculation was new and not widely accepted and when rural New York was the main route for smuggling illegal alcohol to New York City.

While I enjoyed the cleverness of the mysteries in the plot and how they were resolved, what struck me most was how the actions of previous generations can seem so long ago yet still have impacts and echoes in the daily lives of their descendants. I was impressed that the story of the previous generation was told with the same clarity and authenticity as the modern-day story.

Julia Spencer-Fleming managed to weave the two timelines together in ways that were easy to follow and which made both stories stronger. In the process, she set out the dilemmas faced by parents trying to do the best by their children, without being judgemental.pencer

There is a lot of grief in this book, some of which has been carried for a long time. I admired the way that grief was respected and understood rather than being exploited. It kept the book human and it kept the emotions high.

The relationship between Clare and Russ continues to grow and to cause both of them pleasure and guilt. This too is handled with empathy and without ducking the moral issues involved.

It seems to me that this series is getting stronger as it goes along. I'm looking forward to reading the next book.