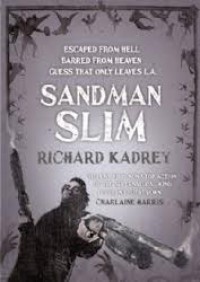 "Sandman Slim" is a frenetically-paced, relentlessly gore-splattered story, powered by some clever trope-twists on the Christian angel myths and told from the point of view of a magic-using anti-hero whose mood flips from maudlin self-pity through smart-mouthed aggression to lethal frenzied blood lust.

It's delivered with punchy prose, unstoppable momentum and violence described with loving attention to detail. The magic and weaponry were clever. The descriptions of LA were sleazy and inventive. The humour was of the self-flagellating kind.

I finished the book out of curiosity rather than enthusiasm. I'd have happily seen Sandman Slim ripped apart by any of the nasty things he went up against and not have felt any sense of loss.

If you're in the mood for a blockbuster splatter-fest with some interesting twisty on angels and devils, then you'll have a lot of fun with this book,