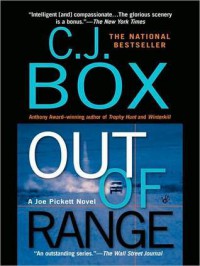 I'm a fan of the Joe Pickett series but I found myself struggling with this one.

Some of it was the change in setting. Joe is pulled away from his sleepy part of Wyoming to the millionaire playground that is Jackson Hole. I've been there a couple of times and although the Grand Tetons and Lake Janet are truly spectacular, I didn't like the atmosphere in the town, which seemed like a theme park for the entitled. Joe doesn't like Jackson much either but I still missed being in Saddlestring.

Then there was Joe himself. I usually see Joe as part of his family. This time he's alone and partially estranged from his wife and when I took a good look at him, I saw someone I didn't much like. Apart from a stubborn refusal to let go of a problem even when it brings him into conflict with authority, I barely recognized Joe.

Then there's the shadow of adultery. You'd think that in a book filled with killings, a little adultery wouldn't take centre stage but it does, mainly because Joe is corrosively dishonest about what he wants.

As the book went on, I found there were some plot-based explanations for his aberrant behaviour but not enough to stop me seeing Joe very differently. What I disliked most was the shabby coyness of the will-they-won’t-they-commit-adultery theme. I almost abandoned the book at this point.

There were some good scenes: Nate in the Stockman's Bar, Joe out at the State Cabin confronting an outfitter, but they were the exception.

The plot was more elaborate than in the previous books. It was clever and original. It seemed to me the book lagged a little in the middle but the ending was crisp and tied things up nicely.

I'm hoping the next book takes me back to people and places that I like better than the ones I met in "Out Of Range".