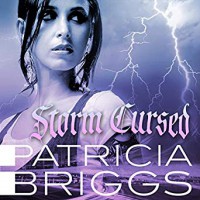 I came late to the Mercy Thompson series. I read the first book, "Moon Called"in January 2017, nearly eleven years after it was published and was hooked immediately. This was Urban Fantasy as I'd always hoped it would be. I've been playing catch up ever since and it's been tremendous fun.

"Storm Cursed", book eleven in the series, was the first one I'd had to pre-order (OK, was too impatient NOT to pre-order) so I'm finally up to date.

I did wonder how this book would go. Many series start to fade by the time they get to book eleven. Book ten, "Silence Fallen" had tried to stay fresh by moving the venue to Europe and telling some of the story from Adam's point of view. It was fun but I hoped for a return to a Mercy-centric story.

When "Storm Cursed" arrived, I pushed my current book aside and dived in.

It was wonderful: familiar but vibrant and with enough new things to keep it fresh. I love that feeling of coming home to a book.

The good things were:

The things that didn't work well:

I'm a fan, invested in the series and I had a good time but… I do wonder where we go from here.

Nevertheless, I'll pre-order book twelve when it becomes available. In the meantime, I'll catch up on the Alpha Omega books where I've only read book 0.5 and book 1.