"Kill The Queen - Crown Of Shards #1" by Jennifer Estep 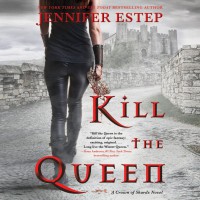 "Kill The Queen" is an intrigue-filled, action-packed romp, set in a classic fairy-tale setting, with castles and princesses, except that some of these princesses hold lightning in one hand and sword in the other.

In this world, ruthless, magic-wielding royals rule, gladiators fight to the death to entertain the crowds and creatures that morph into beasts, dragons and ogres attend royal courts. This is not a happy ever after kind of place. Here the poisonous politics have deadly consequences and the blood and guts spilt by blade weapons are vividly described.

At the centre of the book is a pay-no-attention-to-me minor princess who has spent her orphaned life hiding her power and doing her best to seem harmless but who now finds herself running for her life and seeking revenge for her murdered family. She is a princess we can all cheer for: brave but broken, modest but charismatic, rage-filled and lethal.

Although the book starts a little slowly, in order to establish the fairly large cast of characters, it is most fast-paced, lunging from one nail-bitingly tense crisis to the next. I love the way the plot let me guess the next crisis while keeping the Princess blind, which made me feel insightful, yet was complex enough that I couldn't guess how the crisis would be averted, which made me keen to read more.

This is the best Jennifer Estep book I've read, I have great hopes for this series.

I recommend the audiobook version of "Kill The Queen". Click on the SoundCloud link below to hear an extract.