"Time and Time Again" by Ben Elton -'what if' time travel story that turns from Boy's Own Adventure into something dark, bleak and pitiless 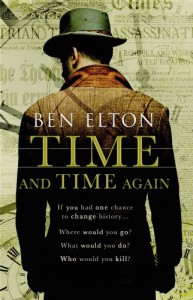 I bought "Time And Time Again" because Ben Elton wrote it and because the cover art (unlike the title) is original and intriguing.

What I got was initially a lot of fun but finally became something brutal, depressing, and horribly plausible.

I was so surprised that, as I finished the book, I found myself feeling angry at Ben Elton for having broken the implicit contract between writer and reader about the type of experience I'd signed up for. If I'd reviewed the book right then, it would have pitched between a confused "WTF was that?" and a disappointed "How could he do that to me?"

Fortunately, I didn't have time to write anything right away because, as the days passed, I couldn't get the book out of my head and I started to understand what Ben Elton had really done.

To be honest, I wish he hadn't done it but you can't unread a book and I can't undo the fact that Ben Elton has abraded my smug view of history as a narrative and left me with something raw and bleeding and much less romantic.

Normally, I enjoy the time travel trope. Who doesn't want to speculate on how things would have turned out "if only"? Normally, I expect a spectacle of altered cause and changed effect that move quickly enough to keep me dizzy and off balance while feeling slightly smug about knowing (at least some of) the history and getting a vicarious tingle from the new possibilities.

"Time And Time Again" starts off like that. in 2025, our hero, an ex-SAS Captain with a degree in history from Trinity College Cambridge, a flair for languages, and a tragedy in his recent past that has destroyed his will to live, is recruited by his old History Professor to take advantage of a once-in-a-lifetime chance to travel back to 1914 and stop the Great War.

The details are original and fun, so I won't share them here but in a relatively short time our twenty-first century Captain is in Istanbul in 1914, bumping up against the obnoxious behaviour of privileged Brits and trying to move west without being noticed. He has to sit on his anger at the Brits of the day because not to do so would put his mission, to save the world from a war that would destroy a generation, at risk.

The fun continues when, travelling west on the Orient Express, he meets a young Irish Suffragette and falls instantly in lust. The exchanges between them made me laugh out loud. He can't keep twenty-first century idioms out of his speech and she is swept away by his New Man views on sexual equality. When he quotes the yet-to-exist Mao and say that "Women hold up half the sky" she practically wants to take him where he sits.

At this point, I settled down into the book, thinking I'd found a romance/thriller that would turn out to be a John Buchanan style ripping good read.

I should have remembered that I was reading Ben Elton. His books are never that simple.

As the story progressed. I started to feel less and less comfortable with Our Her0's certainty that he was right and that the mission to save the world justified any action he needed to take and any casualties that might be suffered along the way, but I was still wrapped up in the thriller aspects of the plot. I wanted to know what happened next. I wanted to know how he pulled it off.

As more and more things started to go wrong, I could see less and less ways for Our Hero to win. I got all the way to the point where Ben Elton stepped outside Our Hero's narrative to reframe the story before it occurred to me that, maybe, winning hadn't been the real objective of the story.

The last section of the book, after the reframing, is shocking,  brutal, and hard to look away from. It seems to challenge all the assumptions that the rest of the book was built on, but what it really challenged was all the assumptions made by Our Hero, destroying his belief in his mission, his values and his whole view of history. He was raised to view history either as Romantic (shaped by the actions of individuals) or Deterministic (progressing along an inevitable path, shaped by socio-economic forces). This is pretty much how I was raised as well. By the end of the book, Ben Elton has made me see that either view of history is self-serving, creating a comfortable narrative that gives me a context I can live with. So going back in time to change the narrative is fundamentally pointless. The real point of history is that is was somebody's present and they had to deal with whatever that present threw at them.

I recommend this book as a fascinating but uncomfortable read. Which, thinking about it, I could use as a description of almost all of Ben Elton's books.