"The Taking Of Annie Thorne" by C. J. Tudor 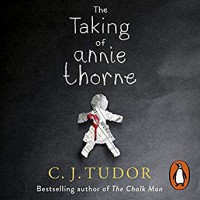 Towards the end of "The Taking Of Annie Thorne", Joe Thorne says:

The past isn't real.

It's just a story we tell ourselves.

And sometimes, we lie.

I think that quote sets the tone for this grim, dark, violent, oppressive book about a man who, lost in his addictions and his guilt, has learnt to despise himself. A man who no longer seeks redemption, just revenge and, if possible, survival.

Joe Thorne is the heart of the book. He is the narrator and his world view stains the whole story like sweat on dirty sheets.

Joe is a teacher, but don't let that fool you. He's also a drunk, a gambler, and an habitual liar. His past has, quite literally crippled him. He's a man filled with guilt, anger and self-loathing.

I didn't find him an easy man to be with but I did find him very believable. In him I could see my worst self: the man who holds grudges, nurtures anger, knows what he should do and then doesn't do it. The man who reacts to confrontations with aggression, even when he knows it will earn him a good kicking.

Fortunately, I don't share his addictions, his tragic history or his isolation but he resonated with me more than I would have liked him to, especially when his reflections on life mirrored my thoughts. Here's an example:

There's a line people spout, usually people who want to sound sage and wise, about wherever you travel, you can never escape yourself.

Get far enough away from the relationships that bind you, the people who define you, the familiar landscapes and routines that tether you to an identity and you can easily escape yourself. For a while at least. Self is only a construct. You can dismantle it, reconstruct it, pimp up a new you.

As long as you never go back.

Then, that new you falls away like the Emperor's new clothes, leaving you naked and exposed with all your ugly flaws and mistakes revealed for the world to see.

Joe Thorne's world is unrelentingly grim. Here's his reflection on the real meaning of the phrase "Time Heals All"

"Time doesn't mend a broken heart, it just grinds the pieces into dust."

There's more to "The Taking Of Annie Thorne" than a grim narrator with a flair for spitting out sharp-edged truisms. It has two other things that make it into an above-average thriller: a clever structure and a core idea that doesn't disappoint.

The book got my full attention by opening with an atrocity and then flipping, with no immediately obvious link, to Tom Thorne's first-person, narrative about journeying back to his childhood home.

For a while, the focus is on understanding who Joe is and why he holds himself and everyone else in such contempt. Then we get the first suggestions that this is a narrative that is going to go beyond the ordinary. Dark hints get added to the self-hate. A second timeline, twenty-five years earlier is opened up. The sense of foreboding rises.

At this point, some thrillers/horror stories fall apart. The big bad turns out not to be particularly big of bad and we slip slowly into an anti-climatic happy ending. "The Taking Of Annie Thorne" doesn't do that. The big bad doesn't disappoint. And when you finally know for certain where all the dark hints were taking you, the book moves into a dramatic end-game that is full of twists that surprised me but never left me feeling cheated.

I recommend the audiobook. Richard Armitage's narration is first-rate. Click on the SoundCloud link below to hear a sample.