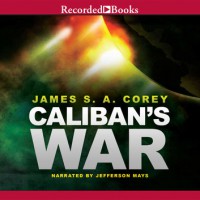 It's tough coming up with a sequel to a book as impressive and successful as "Leviathan Wakes". You have to walk the line between keeping continuity of plot and characters without simply repeating the first book with a slightly different problem set. The second book doesn't have the advantage of being new and unknown so the world-building has to continue and surprise has to be introduced along the way. With a series on the scale of "The Expanse" you literally need to keep expanding the scope and deepening the complexity of the plot while somehow keeping a human focus.

I think "Caliban's War" managed to navigate its way through all those challenges, It then exceeded my expectations by keeping me emotionally engaged all the way through.

After I'd set the book aside, let myself recover, ordered the next book in the series and taken a breathe, I kept coming back to HOW this had been achieved.

I've come up with three rules the authors seem to have followed to make "Caliban's War" work so well.

As with the first book, we have Holden tilting at windmills and launching himself and his crew on a quest to save the girl. Except this version of Holden is carrying the scars from the first book and living with the compromise he made with the OPA. Between them, those things are twisting him into someone he doesn't want to be.

Yet again we have the humanity under threat from the protovirus and ruthless amoral businessmen but this time the governments of Earth and or Mars seem to be involved and its possible that the protovirus has an agenda of its own.

2. Maintain the quality of the writing

One of the strengths of both books is how well written each scene is. There is no filler or padding. This is a novel written with to a well-thought-out storyboard where every scene has a purpose. Nothing is there just to move you along to a more important scene.

The point of view from which any scene is written remains consistent with other scenes from that same character's point of view. The scene may well move the plot along, or foreshadow doom or deepen the world-building but each scene ALWAYS builds the character of the person from whose point of view it's written.

The intercutting of the scenes is artfully managed to keep momentum, let you see some of the story arc coming, and leave you wishing you could have stayed with the previous character's scene for just a little longer.

3. Give me new characters to love or loathe

If I don't care about the characters then I'm not going to wade through a book as long as "Caliban's War". In a series of long books, there needs to be a constant flow of new characters. If the focus stays on the same small group of people all the time then the scope won't expand and it's likely that I'm going to have to twist the characters and their relationships out of shape to keep things fresh.

In "Caliban's War", I was given three new characters to engage with. Each of them is interesting in their own right as people while also giving me a very different view, based on their culture and their mindset, on what's going on.

I got Bobbie a Gunnery Sergeant in the Martian Marines. She competent, apolitical, focused on her mission to kill whatever it was that took her team apart in the opening to the book. She does more than give a soldier's perspective. She adds the view of someone with strong beliefs, independence of mind and a size and skill set that normally makes her the most dangerous person in any room.

I got Prax, the Belter botanist who has spent his life focusing on how to design plants that will thrive on stations and provide everyone with food and air. He's a quiet focused, logical man who takes great pleasure in each small victory while taking setbacks in his stride and keeping moving towards his goal. He's not a man of action. He's not a people person. He sees his work destroyed, his daughter abducted and knows that his city and everyone in it is dying. His reaction, a mixture of deep shock, grief, and grim determination to get his daughter back makes him a fascinating addition to the cast.

Finally, I got one of my favourite characters ever: Avasarala, a senior Earth politician/bureaucrat. In the testosterone-driven world of politics and military strategy, she stands out not just because she's the only woman in the room but because she has created a persona for herself as the old grandmother who wears bright saris, has a foul mouth and is completely ruthless.

Avasarala is not a cardboard cut-out hard-assed politician. She's married to a Professor of Poetry. She twists her diary to spend time with her grandchildren. She will use anyone and anything to get what she wants.