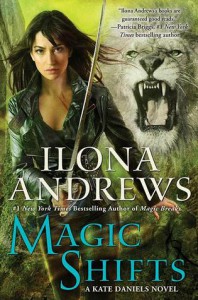 I delayed reading this book for a while as I knew the previous " I am your Father and I may need to kill you" story in the last book, "Magic Breaks" was originally meant to be the end of the series and I didn't want to spoil what I'd already read with a faint-hearted extension requested by the publishers. I was also a little disappointed in and frustrated by the last book.

I should have had more faith in the writers. "Magic Shifts" does exactly what the title implies, it shifts the series to a new level - completely rebooting it.

So how do you reboot a series?:

You don’t wallow in nostalgia, repeat storylines, make things a similar as possible to the original but with a few decorative twists.

You do make the present valuable and the future something to hope for; introduce new threats, new uncertainties and new opportunities to collaborate; dare to let your characters grow, let their actions have consequences, let their lives have meaning beyond kill-the-bad-guy save-the-world try-not-to-die.

When we first met Kate as a misfit mercenary, calling “Here, kitty, kitty” to the werelion Beastlord in "Magic Bites", she was alone and in hiding, taking on all-comers because she had nothing to lose and she knew her doom was coming for her one day. She was afraid of her blood and ashamed at being good at nothing but killing.

At the start of "Magic Shifts" as Kate rides home through the Atlanta night, sword on her back, blood on her clothes, we immediately see how she's changed: she's comfortable in her own skin, reconciled to her power and happy to use it.

“…the night shadows watched us and I watched them back. Let’s play who can be a better killer. My sword and I love this game.”
She's also not alone. She now has a family, friends and a city to protect. At the end of the last book, she has turned her whole world upside down - a truce of some sort with her father, a responsibility of some sort for the city she claimed, a life completely outside of the Pack, even a house in the suburbs. She and Curren have gotten past the will we won’t we? stage into the more interesting how will we stage. Of course, she still has this I-have-to-save-everybody reflex, she still behaves as if she's invulnerable, although the evidence shows she isn't and she still worries about the monster she might become. I guess that's what makes Kate Kate.

Curren is having fun in the suburbs, free from the politics of being Beastlord and enjoying being underestimated by strangers who see him as Kate's muscle.

This is a fast-paced action-packed book that starts with a battle that's really more of a slaughter - two against thirty isn't really fair when the two are Kate and Curren - and the violence escalates from there. We get new monsters, a new baddy an interesting new ally, all wrapped up in a puzzle that uses characters from earlier books in new ways. One of my favourite pieces was Kate meeting her I'm-the-most-dangerous-being-in-the-world father at Applebees for a family dinner. That started off as funny and became quietly menacing.

Although the pace is fast, it's always perfectly controlled. .When I reached the penultimate chapters I thought “Oh no - cliffhanger ending” I should have known better. What I got was a perfectly executed, action-packed, denouement that delivered a satisfying conclusion to the puzzles in the book, followed by an epilogue that deepened the emotional impact of ending and opened intriguing possibilities for the next book.

This is how you do Urban Fantasy when you’re at the top of your game.