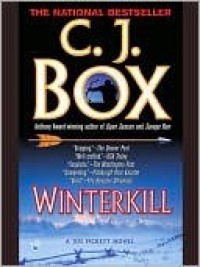 "Winterkill" is my third visit with Wyoming game warden, Joe Picket and the best one so far. Set a little while after the events of "Savage Run", it continues the story of Joe and his family trying to live peacefully in a small town in the mountains but constantly bumping up against violent conflict and local politics.

What keeps me coming back to C. J. Box's books is his ability to write sharply focused scenes that build tension.  Whether it's Joe Picket dropping unexpectedly into mayhem in the mountains and emerging from a snowstorm carrying a dying man on his back,  or his 5th Grade daughter, Sheridan, having a  confrontation with threatening adult strangers at her school's gate, C, J. Box lets us see everything clearly. He pays enough attention to detail to show me a world I don't know from the point of view of a person I understand while keeping  a strong sense of forward motion,

Joe makes a great central character; an honest man surrounded by the violent, the power hungry and the angry. His focus is on his family, his strong, independent wife and his young three daughters, and on trying to do his job fairly.

Joe isn't a superhero. He's a lousy shot and sometimes gets taken completely by surprise by the violence of others. His influencing skills, especially in a public or political setting, are poor. His absence of ambition, his unwillingness to compromise and his tenacity in pursuing the politically sensitive, win him a lot of enemies and he has no real talent for winning allies.

What I liked about this book was that all of Joe's character traits are put to the test by the situation he finds himself in. Doing the right thing for his family means breaking some of his normal rules of behaviour. He discovers within himself a violent rage that frightens him but which he needs to use if he's going to save the people he loves. Somehow a Joe Pickett who is starting to lose himself is even more interesting and engaging than a Joe Pickett who just finds a way to do right.

This is a book filled with violence, death and rage. It looks at what happens when Federal power is in the hands of the wrong people. It shows how hard it is, in States where most of the land is owned by the Government, for communities to have a voice and how easily authority and the voiceless end up in armed conflict.

In this book, Joe finally acquires an ally. Not deliberately of course. Just by doing the right but difficult thing. His ally is sort of a shadow version of Joe. Someone who will do whatever he thinks is necessary to make the bad guys go away. I liked the fact that, while this made Joe more powerful, it also made him much more likely to fall into the pit of his own rage. Joe's ally is part guardian angel and part Faustian devil.

C, J. Box has a flair for describing Wyoming in a way that makes me hungry to be there again. In this book, the snowstorms that rage through the mountains become almost a character in their own right.

C. J. Box is never afraid to have bad things happen to good people, which this time, made parts of this story a harrowing read.

I found the ending of the story not entirely credible. I'm sure that events could happen that way and that the explanation of them would be accepted but I think the impact on Joe and his wife would be greater than I've seen so far.

Still, maybe I have to wait for the next book to see that.

If you're looking for an intelligent, slightly off-centre thriller set in wide open spaces., this is the series you should start with.