"The Elementals" by Michael McDowell 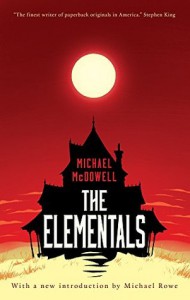 If you're looking for a deeply atmospheric, well-written and perfectly narrated novel to fill you with an inexorable dread, "The Elementals" is the book for you.

"The Elementals" has a remarkably powerful, cliché-free start, that embeds your imagination in the South like a throwing knife splitting a rotting log. What better way to start than with a funeral that goes from dire and depressing to deeply disturbing in a few pages.

I'd never read Michael McDowell before but I wasn't surprised to learn later that he was an excellent screenwriter.  The style of"The Elementals" is cinematic in a lots-of-close-ups, see-the-motes-in-the-sunlit-air lighting and strange but intimate camera angles kind of way.

The characters, especially Luker and his preciously independent daughter India are engaging and believable. Despite being unconventional people (Luker came from around hear but he raised his daughter in New York City so you can't exactly expect them to be normal, can you?) become the anchor points for sanity in a world that is sliding towards the lethally strange with the slow grace of an unmoored house sliding of a cliff into the sea.

The heat becomes almost a character in the story in its own right. India discovers for the first time the heat and humidity induced languor of the South that bends time and alter perceptions. Luker explains to her that this hot humid coastal resort of Beldame is:

"...a low energy place. The kind of place where you can only get one or two things done in a day and one of those is getting out of bed."

Not surprisingly, the horror in this book is of the slow but deeply disturbing kind. It seemed to me that the dread in this book had a pulse: slow and strong, like an ambush predator waiting on a branch.

Having this atmospheric tale delivered to my ear in R.C. Bray's gravelly but insistent voice was a remarkable reading experience.