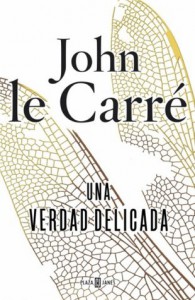 I came late to John Le Carré, falling in love with his prose storytelling style upon my first encounter with them when, last year, I read his remarkable novel"A Legacy of Spies".

Naturally, I had to have at least one Le Carré in my Summer of Spies reading challenge this year, I picked "A Delicate Truth" because, published in 2013, it was his next most recent book and because the audiobook version that I listened to was narrated by Le Carré himself.

I found the novel very satisfying both because the world it describes is frighteningly plausible without ever becoming melodramatic and because the cadence of Le Carré's prose and his nuanced use of language, especially in dialogue call to something in me in the same way that the best music does.

In some ways, this is not a very dramatic tale. It covers poorly conceived, disastrously executed and robustly covered-up covert operation. The body count is low by genre standards. There are no car chases. No desperate gun battles on the streets of London. No evil genius strapping our hero to a table to be dissected by an industrial laser. Yet the import of what it describes is truly disturbing.

The tale starts slowly satisfyingly,  by establishing the point of view of a mature senior Civil Servant in the FCO, pulled in over his head by an ambitious Minister, to oversee a covert operation in Gibraltar.

As I watched the stolidly upper-middle class civil servant, son of a general, married to money, well-educated but only moderately accomplished, thrill, in an appropriately low-key it-wouldn't-be-good-form-to-express-my-feelings kind of way, to the opportunity to serve his country, even if that meant obeying a bullying, egocentric, self-serving Minister, I understood that Le Carré's England is not mine or, at least, not an England I want to tolerate.

I recognise that it's real enough. It's the kind of England the odious Boris Johnson and the surprisingly dangerous Jacob Rees-Mogg want to drag us all back into so that they can live the Eton dream while the rest of us touch our forelocks and hope to keep our jobs.

It's an England where the under-funded State is preyed upon by billion dollar Private Military Corporations that are contracted to kidnap and kill with an impunity secured by anti-terror legislation that has eroded public accountability to the point of non-existence.

Le Carré describes the people of this world with great precision and insight without ever once straying into empathy. I admire that.

Nothing in the content of Le Carrè's story surprised me, a fact I find deeply depressing, but it acted as a reminder of how the clannish secrecy of an entitled ruling class mixes with the greed and egocentricity of politicians whose eyes are the revolving door into high-flying commerce to create something fundamentally corrupt.

Yet what I like most about Le Carré is the way he tells his tale. He takes his time. He uses complex sentences. He moves the reader effortlessly backwards and forwards along the timeline and he perfectly evokes a sense of place, whether it is a Cornish Fair, a Private Club or the corridors and conference rooms of the FCO.

Here's a sample of that prose from the start of Chapter Two, where we are introduced to Toby Bell, the man around whom most of the story centres. It's a slightly long extract but that is necessary to demonstrate how he evokes the man and his situation. If you like this, you'll like the book.

"On a sunny Sunday, early in that same spring, a thirty-one-year-old British Foreign servant, earmarked for great things, sat alone at the pavement table of a humble Italian café in London's Soho, steeling himself to perform an act of espionage so outrageous that, if detected, it would cost him his career and his freedom. Namely, recovering a tape-recording elicitly made by himself from the private office of a Minister of the Crown whom it was his duty to serve and advise to the best of his considerable ability.

His name was Tony Bell and he was entirely alone in his criminal contemplations. No evil genius controlled him. No paymaster provocateur or sinister manipulator armed with an attaché case stuffed with hundred dollar bills was waiting around the corner. No activist in a ski mask. He was, in that sense the most feared creature of our contemporary world: a solitary decider. of a forthcoming clandestine operation on the Crown Colony of Gibraltar, he knew nothing. Rather it was this tantalising ignorance that had brought him to his present pass.

Neither was he in appearance or by nature cut out to be a felon. Even now, premeditating his criminal design, he remained the decent, diligent, tousled, compulsively ambitious, intelligent-looking fellow, that his colleagues and employers took him for. He was stocky in build. Not particularly handsome with a shock of unruly brown hair that went haywire as soon as it was brushed. That there was gravitas in him was undeniable. The gifted, State educated only child of pious artisan parents from the South coast of England who knew no politics but Labour..."

One of the joys of the book, for me, was Le Carré's narration. Click on the SoundCloud link below to hear him read the start of Chapter One.