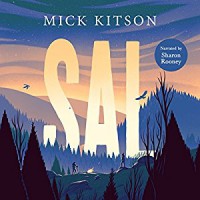 "Sal" is an original, engaging, story that deals with child abuse with empathy and compassion without turning the children into victims defined by their abuser. It made me think, cry, smile and get angry, sometimes within the course of a single page.

Sal is a thirteen-year-old girl who, after months of planning, has fled with her ten-year-old sister, Peppa, from their home in Glasgow to the forests of the Scottish Highlands, where, with a Bear Grylls knife, a compass, waterproofs, a first aid kit and what she's learned from the SAS Survival Handbook and watching YouTube videos, she intends to survive.

The main strength and the main limitation of the novel are that it is told entirely from Sal's point of view. Sal has a unique voice, that Sharon Rooney brings to life with wonderful clarity in the audiobook version. When Sal is describing the mechanics of survival, from making a bender to shelter in or snaring, skinning and cooking a rabbit, she is matter-of-fact, competent and well-researched. When she thinks about her past, the reason for their flight and what she had to do to achieve it, she is initially much more oblique and finally heart-breakingly dispassionate.  Only when she describes her sister, the always energetic, irrepressibly optimistic Peppa does real joy enter her tone.

I was quickly invested in Sal and her endeavours and then, as I slowly began to understand their cause and their cost, deeply worried for her.

The first half of the book was totally engrossing but I couldn't see how the Sal could resolve the situation she was in. Then a new character is introduced, a doctor in her seventies, who is living in a bender in the forest. She helps the girls both to survive and to resolve their situation.

The Doctor an interesting history: childhood in wartime Germany, trauma in the fall of Berlin to the Russians, being a doctor in the DDR and defecting to Scotland, building a life here and then the choices that led to her woodland life. One of the problems is that we learn all of this from Sal, filtered by her understanding of the story and her fact-focused way of collecting a story. I found the Doctor to be a little too much of a plot device.

Yet the plot remained original and surprising. The final resolution was perhaps a little too neat or perhaps Sal just doesn't want to talk about the messy parts or isn't willing to see them yet.

"Sal" is a very satisfying, thought-provoking but accessible novel. Sal herself is someone who will live in my memory for a long time. What more can I ask of a novel?