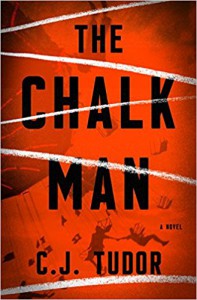 "The Chalk Man" is a thriller set in a small English town and told in two timelines: the summer of 1986, when the main characters are twelve year's old, and forty years later when someone challenges what really happened in 1986.

It is a very atmospheric piece that captures both the feel of being twelve in 1986 and the reality of having lived in the same provincial town, with the same people, for forty years.

Initially, the 1986 timeline in "The Chalk Man" reminded me of Stephen King's novella "The Body", which was made into the movie "Stand By Me". It had a similar intensity but a much more British feel and the dynamic was altered because the group of twelve-year-olds included a girl.  The 2016 storyline was too bleak and filled with too much self-loathing to be a King story. I found both the fear in 1986 and the despair in 2016 very believable.

"The Chalk Man" has a plot, constructed around violence, secrets, fear, transgression and revenge, that is intricate and not fully disclosed until the final chapter.

Yet it is not the plot but the depth of the characterisation of Eddie as child and man that makes the book special. Both timelines are told from Eddie's point of view. In 1986 he seems, at first glance, to be a bright, curious boy. In 2016 he is a defeated man, with a weakness for drink, doing a job he has no passion for and still living in the house he grew up in. As time goes by, it becomes clear that Eddie is more complicated than that and that his memory and therefore his version of events, may not be entirely reliable.

This is a story where people are not who they seem to be, either because they lie or their memories lie for them. Discovering the truth becomes a complicated business, leading me eventually to realise that the real truth was not about who killed whom but about the web of lies and memories that had bound the four main characters together for over forty years.

This is an engaging, page-turning, read, I listened to the audiobook version which was narrated by Andrew Scott as the 2016 Eddie and Asa Butterfield as the 1986 Eddie. Both gave great performances although I did experience a little dissonance because the grown-up Eddie speaks with an Irish accent that the young Eddie didn't have.

"The Chalk Man" is C J Tudor's first novel. You can read an interview with her about how she wrote the book HERE

Click on the SoundCloud link below to get a sample of the audiobook narration.