"City of the Lost - Casey Duncan #1" by Kelley Armstrong 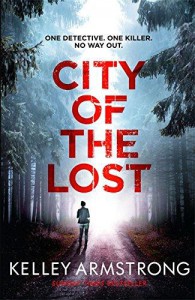 I'm a fan of Kelly Armstrong's thrillers.  When she sets the supernatural aside it seems to me that her writing gets grittier and darker and her strong women become more complex. In her Nadia Stafford series, the female lead was an ex-cop turned assassin for hire.  In "City of the Lost" the twenty-something female lead is a homicide detective who shot and killed her former boyfriend when she was eighteen. I love the way Kelley Armstrong navigates the moral fog that this produces and gets beneath the skin of good people who have done bad things.

The premise of "City of the Lost" is one I haven't come across before. Part of the fun of the book is arriving at that premise so I won't share it here beyond saying that it results in our Casey Duncan, our female lead, hunting down a killer in an isolated, primitive environment deep in a vast wilderness of a Canadian forest.

The first third of the book is set in a city and yields Casey's backstory, sets her up for the wilderness and shows us the strong, fierce but haunted person she's become. The writing is powerful. The action is intense. The violence and threat are so vivid that they become hard to take. This is first-rate stuff.

The second third of the book is set in Casey's new environment and is filled with discovery, the possibility of making a fresh start and the reality of multiple, fairly gruesome murders that need to be solved. The pace is more relaxed but the tension is still there and the novelty of Casey's situation and her reaction to it more than compensated for a slow down in the violence. I particularly like Casey's take on how "a climate of expectation" can put women in male-dominated, frontier-type environments at risk.

The third part of the book solves the murder mystery in a reasonably satisfying way and moves forward the relationships between the main characters. For me, it didn't fully deliver on the potential of the first part of the book. The romance parts, although handled well, seemed to be a little too protracted and too fueled by hard to sustain misunderstandings.

Overall, I thought this was an intriguing thriller in an original and compelling setting, populated with believable characters. The women are especially well drawn and the impact of abuse and guilt is shown with skill and empathy but without becoming maudlin or didactic.

There's a second book in the series. This surprised me as the first book seems to tie everything up but I'm sure Kelley Armstrong will have some original twists to offer so I'll be giving it a try.