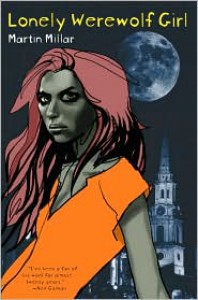 This is a fun book that stays with you long after it's finished.

For the first few chapters I wondered what exactly I'd bought. Millar's writing style is hard to tag and initially I found it distracting but as I let myself listen to the rhythm, I realised that the occasional jerkiness of the text was deliberate.It gives this book a sort of Punk energy that kept me slightly off-centre but always engaged. It's the writer's equivalent of shooting a movie with a hand-held camera, the result is less smooth than using a dolly but it gains a kind of credibility, a sense of really being there, that the fixed camera can't match.

"Lonely Werewolf Girl" is a big book with a large character list and rich back-story. It is filled with humour even though the themes are dark and it rattles along, urging you to keep turning the pages even though you know you should have been asleep an hour ago.

Initially I thought that the lonely werewolf girl of the title was Kalix MacRinnalch, a vulnerable, violent, self-abusive and anti-social young girl who is also brave, passionate and wonderfully unable to understand the world around her.

By the end of book I understood that all of the MacRinnalch women qualify as lonely werewolf girls.

The world that Martin Millar builds is energetic, vivid, quirky and addictive. Thankfully there are two more books in the series.

Martin Millar has collected the startling variety of covers his Kalix novels have received HERE. It's worth taking a look.