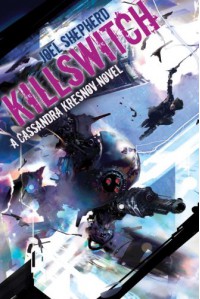 “Killswitch” carries straight on from “Breakaway”. Cassandra has completed her transformation in the eyes of the Kalian public from feared killer fembot android to kick-ass hero, defending the planet and helping to lead the planetary defence force. We’ve almost reached the point where people might think that GI super-soldiers are a good thing. Then Joel Shepherd mixes things up in intriguing ways.

Firstly, it turns out that Cassandra is not so invulnerable after all, there is a killswitch in her head that can end her at any time. Secondly there is a rogue GI on the loose, based on her own design but with none of Cassandra’s scruples about not killing people. Thirdly we see more of the on-planet League GIs, both a former member of Cassandra’s League Dark Star team who is going through her own evolution and the enigmatic Head of Security at the League Embassy.

This mix produces great action scenes but it also provides a vehicle for looking at just what it means to be a GI: the power that they have, the loyalties that shape them and the choices that they face.

Add in terrorists, political intrigue and a blockade by the Earth Space Fleet and you have another fast-moving sci-fi military thriller.

Joel Shepherd writes the action scenes with flair (although I thought one of the chases with Cassandra eluding security went on too long) and makes you care about the people, even when the people are artificial. There is humour as well as action, politics as well as relationships and an ever-deepening understanding of the universe this is all happening in.

But what keeps me coming back to the Cassandra Kresnov books is the hopeful tone that they strike. Although the books are full of threats, violence and gun-battles, at their heart there is a sense of tranquility that comes from Cassandra herself. She understands that the threats are real and that the violence is necessary but what drives her is a desire to protect her freedom to spend time with the people she loves and to catch the next wave on her surfboard. From Cassandra, these are far from shallow aspirations. She has the ability and the intellect to be an almost unstoppable killing machine who could subdue whole planets to her will. That she chooses to eat out with her friends and work off her energy of a surfboard, demonstrates her understanding that, while war is sometimes necessary, it is peace that is the glory of any civilization. I enjoy immersing myself in this refreshing and perhaps distinctively Australian, view of the world.