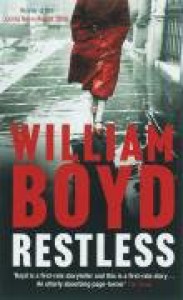 "Restless" is both a compelling thriller and a close look at the mechanics and consequences of deception. It slides easily across the tongue and then leaves an after-taste that is complex and intriguing.

The novel takes place on two historical timelines simultaneously: Oxford in the 1970's (presented as the present day) and Europe/US during World War II. In Oxford, a young single-mother taking her PhD, is handed a file by her eccentric mother. The file describes a life she did not know her mother had lead: being a spy for the British in World War II.

The spy account by itself would be fascinating reading and avoids the groan-factor that I feel when I see yet another book set in the Second World War, written by people who my as well be writing about Narnia as far as their personal experience goes. The tone of the World War II writing is clipped and hard-boiled, the content is well researched and the action has you turning the pages.

What sets the novel apart is linking this dramatic spy story to the same woman, now a grand-mother, in Oxford. In many ways, the Oxford of the seventies (which I remember) is more alien than the World War II sequences.

The second time-line allows distance from the World War II time-line; an opportunity to step outside the thinking of the war years and see things differently.

It also underscores that history doesn't happen in neat little decade-long packets that are independent of one another;  what happened in our past still ripples through our lives decades later. It asks questions about whether, across all those decades, we remain the same person. It explores identity as a construct and trust as a commodity to be traded.

Read it for the thriller rush. Remember it for the ideas and the skilful writing.